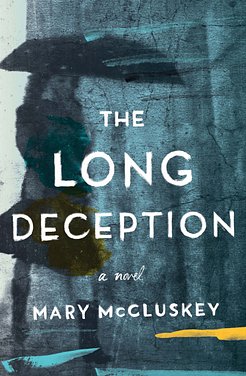 The Long Deception - by Mary McCluskey

The sudden death of a childhood friend forces a woman to rethink her own life—and make an impossible decision.

Alison Eastlake has come a long way from the wild days of her youth in England. Now, instead of streaking her hair purple, dreaming of becoming an artist, and sneaking cigarettes in her friend Sophie’s basement, she has a career in advertising in Los Angeles and attends black-tie dinners with her executive husband. She fears that she is fast becoming the type of person she once despised.

When Alison receives news that Sophie has died of a drug overdose, leaving behind a slew of unanswered questions, she must go back home. Once there, she unearths reminders of her unruly past, including feelings for Sophie’s brother, Matt—and finds that she is still powerfully attracted to him.

Careening dangerously close to a full-blown affair, Alison must now make an impossible decision. But when a long-buried secret about Sophie resurfaces, it shatters everything Alison had always believed about the past—and forces her to rethink her own life, her marriage, and her future.

This novel raises comparisons to Gone Girl and some of the other recent stories about characters who aren't who they seem, but McCluskey's beautiful prose elevates it above most of them…Haunting and lyrical, understated and true.”

"[McCluskey] succeeds in handling the grief of a parent struggling with loss. For readers who want character-driven, heartrending stories that build in intensity."  LIBRARY JOURNAL

"Intrusion is both a classy thriller and a psychologically acute tale about the vulnerabilities grief can open up in us." - PAMELA ERENS, author of The Virgins

Mary McCluskey's prizewinning short stories and essays have been published on Salon.com and in the Atlantic, the London Magazine, StoryQuarterly, London's Litro and other literary journals in the United States, the United Kingdom, Australia, and Hong Kong.

She divides her time between Stratford-upon-Avon and Los Angeles.